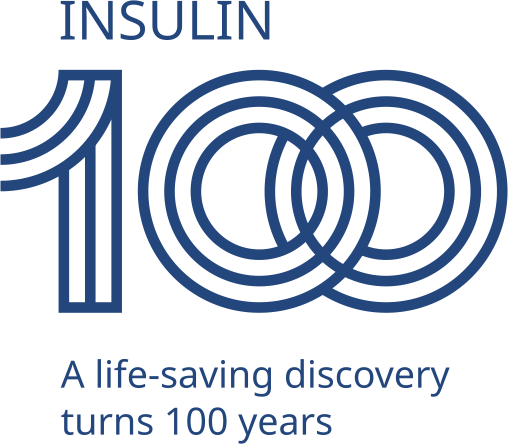 Today, millions of people with diabetes are able to live full, active lives because of insulin therapy.1 But one hundred years ago, a diagnosis of type 1 diabetes was essentially a death sentence. At the time, people with diabetes were typically put on ‘starvation diets’ of repeated fasting for long periods, with little food intake to relieve symptoms.2 Widely recognised as one of the greatest achievements in medical history,3 the discovery of insulin revolutionised the treatment of diabetes and has saved generations of lives.4,5

A team of passionate doctors

Insulin’s legacy started in the summer of 1921. Based on a hypothesis that a pancreatic hormone could reverse the effects of diabetes, Toronto-based Dr Frederick Banting and his assistant Charles Best, along with Professor John Macleod at the University of Toronto, extracted insulin from a pancreas and successfully tested its effect in dogs.6

A few months later, in January 1922, 14-year-old Leonard Thompson became the first patient in the world to be treated with insulin at a hospital in Toronto.

A century of breakthrough innovations

For decades, Novo Nordisk and its precursor companies have made breakthrough advances in the treatment of diabetes.

Each innovation has been made through years of research, testing and inspiration and always with the patient in mind. Together, they have transformed diabetes from a death sentence into a disease which patients can control whilst living full and healthy lives.

The discovery of insulin made it possible to survive diabetes. However, the life of a patient was extremely challenging. The insulin for treatment was extracted from pigs or cows, limited in supply and often impure. Whilst it could be enough to keep a patient alive, it was nowhere near as effective at controlling blood sugar as the insulin produced naturally in the human body. Patients needed to inject very frequently, including at night to stay alive. They often suffered allergic reactions at the injection site, and sometimes severe or even fatal allergic reactions to their treatment.

Fast forward to 2021 and the life of a patient is very different. They can rely on a highly pure treatment, not based on animal insulin, and which will not cause an allergic reaction. Their treatment can control blood sugar much more effectively, reducing the risk of complications such as dangerous episodes of low blood sugar, blindness and cardiovascular disease. Also, injections are far less frequent, simpler, more accurate and more flexible.

In short, a person living with diabetes in 2021 has vastly improved health outcomes and the freedom to eat, exercise and live their life with far fewer restrictions.

The quest to defeat diabetes continues

Today, more than 25 million people with diabetes rely on Novo Nordisk for their life-saving insulin. But with an estimated 736 million people expected to have diabetes by 2045,7 diabetes prevalence is continuing its upward trajectory, with devastating effects for individuals, families and society.

While medical advances continue to be crucial, we realise that it takes more than medicine to truly defeat diabetes. We are working to provide access to affordable care for vulnerable patients in every country, support capacity building within healthcare systems and engage with partners globally to address the root causes of diabetes.

The quest to improve the lives of the millions of people with diabetes by advancing treatment, driving prevention and ultimately curing diabetes inspires our work today and for the next hundred years.