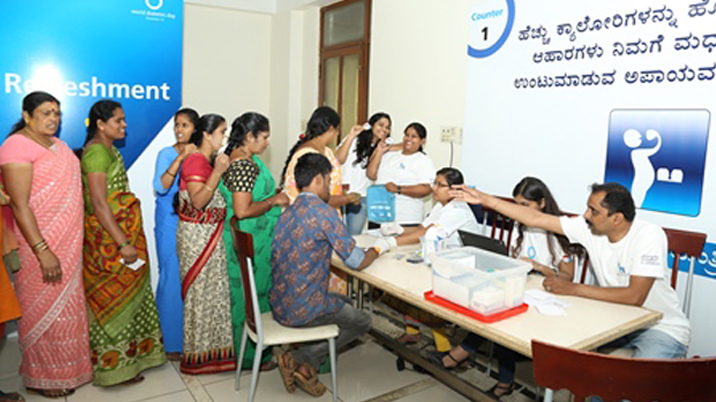 In the 10th year of 14 November being recognized as an official UN day, Novo Nordisk Education Foundation reached 10 million households through an innovative campaign which included a perception survey, in-clinic activities, traditional and digital media as well as a mega screening camp.

The theme of “Women and Diabetes” acknowledges the need for women to be more health-conscious, and recognizes their role as change makers, while urging men to participate in the focus on women’s health through their roles as fathers, brothers, sons and partners.

Novo Nordisk India’s field staff conducted about 1000 in-clinic activities to reach at least 15,000 patients and caregivers. They supported doctors in appreciating their female staff and patients with badges recognizing them as “superwomen changing diabetes”, conducted walkathons, discussed the risks to women and asked women to take a pledge to adopt a measure that would help them lead healthier lives. Education material was made available in 11 languages.

A contest run on Facebook received 800+ engagements, 500+ likes and a very high number of shares. Changing Diabetes® brand ambassador and former India men’s cricket campaign Anil Kumble shared the contest with his 1,110,684 followers. The winners of the contest received the opportunity to travel to Bengaluru for an exclusive interaction with Anil on 14 November.

The day before the main event in Bengaluru, the 100+ head office employees gathered to learn practical ways to lead healthier lives such as through yoga and clean eating. A chef from a well-known hotel was invited to demonstrate easy and healthy recipes. The management team encouraged employees to be role models in leading a healthy lifestyle.
With the release of the 8th IDF Atlas, it is clear that India will continue to be a country that will need urgent awareness and action at the highest levels to drive change. The main event at Bengaluru took the discussion to the heart of the government through a programme at Vikasa Soudha, the Legislative Assembly annexe.

On 14 November, Novo Nordisk Education Foundation joined hands with the Karnataka State Women’s Development Corporation (KSWDC) and the Karnataka State Government Employees Association (KSGEA) as well as related bodies to run a mega screening camp. These organizations have a combined membership of 600,000 people. Over 60 Bengaluru-based Novo Nordisk India employees as part of TakeAction initiative volunteered at the awareness cum testing camp held for the government employees. Over 1200 government employees, 40% of whom were women were tested for diabetes by qualified nurses. 88 government employees were found to have previously undiagnosed diabetes and 79 were in the stage of pre-diabetes. Novo Nordisk India’s doctors were at hand to counsel and guide them at this critical discovery phase. Six meritorious girls students from the Changing Diabetes® in Children programme received scholarships from the dignitaries.